Zach Truting has been named to the 2021 Class LL 1st Team as a linebacker and as one of six linebackers in the state to be named to the Walter Camp Foundations All CT Team .  The leader of our defense was selected as one of four backers in the LL.  He had 131 tackles, 4.5 sacks and 17 TFL (tackles for a loss).  Congrats to Zach!

The 2021 season wrapped up with a celebration of the seniors at the Simsbury Inn on Sunday, December 6th.  Thank you to the wonderful staff for making the night special.  thank you to Liz Butler and the Gridiron Club for always going above and beyond for the program.

Our football family appreciates everything you do to support us!

We will be ready for an awesome 2022 season!

See you in September!! 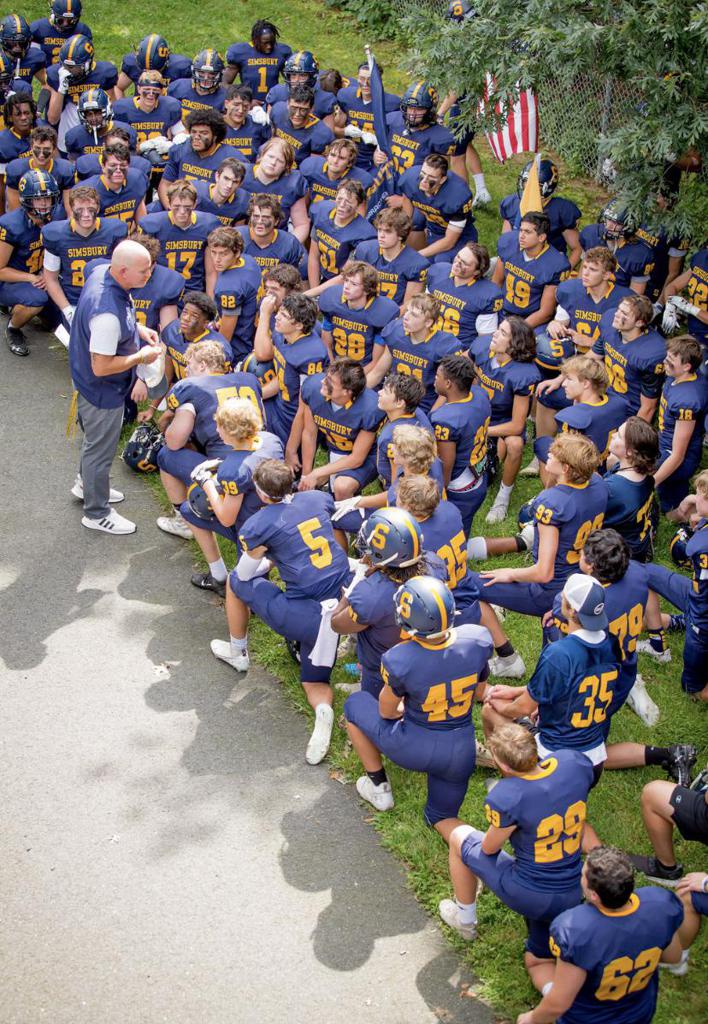 Join the Simsbury Trojan Football family and become a part of something special.  For information about becoming a Trojan please email Coach Masters at shstrojansfootball@gmail.com

RT @Isaac_riverra: Thankful for visiting University of New England. Special thanks to Coach Treschitta and Coach Kitchen for having me. Go…

Congrats to @zach_truting18 on being named to the Class LL ALL STATE 1st team as a linebacker! Great job #44!!… https://t.co/ybZ0sGSHZJ

Thank you Simsbury football family for your generosity to the @CovenanttoCare for CT children. Delivery made this… https://t.co/racnyxEgQM

RT @ItsCoachBBell: If you would like to play on the Blue, this is what you have to do… -Apply -Turn your FAFSA in Let the process begin! #…

RT @zach_truting18: On Sunday night, my Simsbury High School football career came to an end. What a memorable banquet with my coaches and t…

RT @SGCBoosters: Thank you football family! Because of your generosity, Covenant to Care for Children will be receiving over 550 pairs of…

Robert Holloway played on three varsity teams where he earned five varsity letters throughout his years at Simsbury High School.  He was a varsity baseball player and a two-time captain of the basketball team.  Each year he was the captain of the basketball team they won the Little Three Trophy. It was on the football field where Bob truly excelled.  As the football captain he set the record for most touchdowns scored in one season (17).  During that year he earned honorable mention Prep All-American honors and was a participant in the Connecticut Nutmeg Bowl.  He went on to play football for two years at Central Connecticut State University.

After college, Robert settled in Simsbury with his wife Elsie and their three children, all of whom graduated from both Simsbury High School and the University of Connecticut. Robert has continued to run the four generation Simsbury family business, Holloway’s Appliance, for forty years.

Kevin Moss was an outstanding all-around athlete and elite football player.  Born and raised in Harlem, NY he came to Simsbury as a thirteen-year old through the A Better Chance program. Kevin participated in football, wrestling, track & field, and baseball.  He was a two-time All Conference wrestler (the only two years he participated) and a Class L State Tournament place finisher. In track & field, he was also a two-time All Conference athlete (shot put, an event in which he went undefeated for two years in conference play) and a Class L State Tournament place finisher. However, the gridiron is where Kevin truly excelled. He was a three-year starter on both the offensive and defensive lines.  He was a two-time All Conference defensive lineman, received multiple team honors, and was named to the Class L All State team as a defensive tackle.  In all, Kevin was a six-time All Conference athlete who earned All State and or State place finishes in three sports.

Kevin’s post high school career added to his many accolades as he focused on football while at Lafayette College.  There he was a four-year starter in football.  He was named team Rookie of the Year as a Freshmen and Offensive Lineman of the Year as a junior and senior. Well respected by opposing coaches, Kevin was a three-time All-Patriot League Left Tackle and 2002 Honorable Mention All-American. In 2007, Kevin had the privilege of playing semi-professional ball in the Austrian Football League for the Swarco Raiders. Currently, he spends his free time as a college football official in the Missouri Valley Football Conference.

Kevin lives in Beacon, NY with his wife, Rasheena, and twin boys, Charles and Will.

These fine organizations make what we do possible. Please show your support to these amazing sponsors and thank them for their commitment to our organization. Interested in becoming a sponsor? Click here to learn more about our sponsorship opportunities.